skip to main | skip to sidebar

An Avid McCoy collector, David Perry, passed away December 23. David and his wife Shelley were a big part of the McCoy Pottery Collectors Reunions for the years that they came. David and Shelley always had a room full of beautiful McCoy for sale during the week there. David had a wonderful, lively sense of humor and was a lot of fun to be around.
Posted by Quita at 7:55 PM


It's not too late to visit the Museum and see Nelson and Billie this Saturday.
Posted by Quita at 8:09 PM

http://randolphlibrarynews.blogspot.com/2011/09/vintage-pottery-donated-by-two.html
Posted by Quita at 8:26 PM 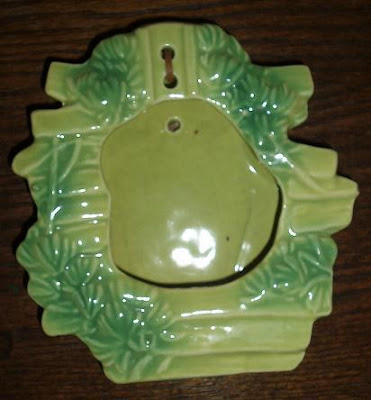 This item is marked Buckingham but it was an item made by McCoy Pottery. Not all Buckingham was made by McCoy though. This is unwired but was designed for a wall lamp and you also could have a plant inside the opening.
Posted by Quita at 10:33 PM

Check out the McCoy Pottery Collectors Society on Facebook.
Posted by Quita at 9:42 PM

The new one is in the Middle

Newest Item in my Collection 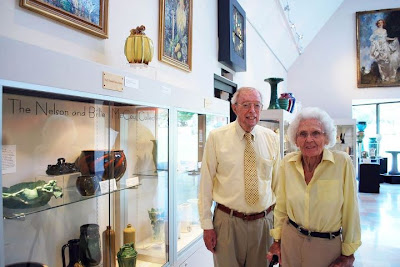 Labels: Nelson and Billie enjoyed the opening of their display

The Zanesville art Museum is hosting a display of Mc Coy Pottery from the collection of Nelson and Billie McCoy. If you're in the Zanesville Area or planning a trip that direction this could be something you'd like to see. I visited this museum in July and it is a wonderful Museum.

Click on the title above to get to their site for details. 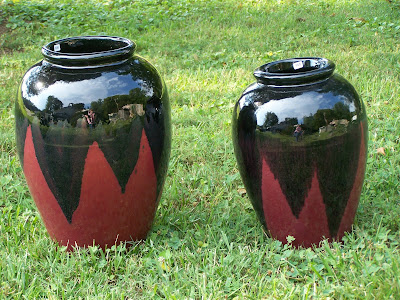 These are two HEAVY oil jars...Aren't they pretty?

My Favorite "find" in Zanesville during the McCoy Convention 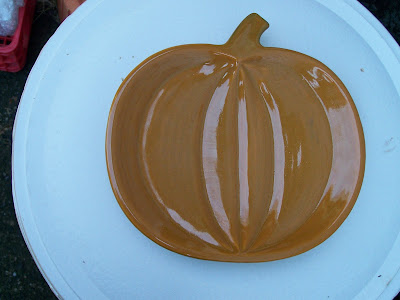 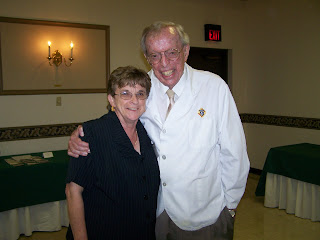 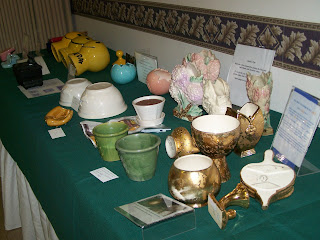 Fun in the Making! 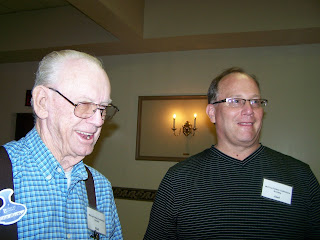 This Unusual Planter sold at our Auction 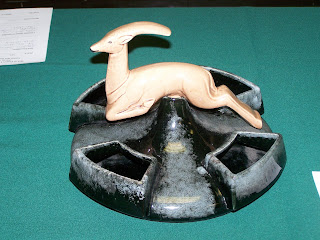 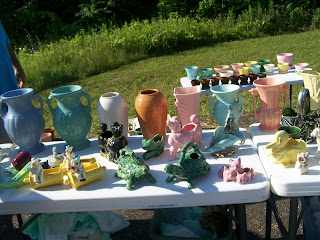 This years Reunion/Convention are in the past now and plans are already in the works for 2012. It is NOT too early to start thinking about attending. Our attendance was up this year, McCoy was Available and Bargains were found!
Everyone was in a jolly mood and we had fun! We had newcomers this year, too...great folks!
I'll be putting some photos up here and there are some on our new FACEBOOK account...Just do a search on Facebook for McCoy Pottery Collectors Society!

I'm way far behind in answering e-mails...had a friend who had back surgery and helped him recover...trying to clear my house of some duplicates...tried to keep the yardwork up until it got so horribly hot here, general stuff but McCoy is a must so I'll try to get them answered soon .
Posted by Quita at 12:36 PM

http://www.visiononmainstreet.com/
The uptown of Lenoir has had great difficulty staying alive the past few years. The economy in this area just is rotten, or worse. When I grew up here this town was known as the FURNITURE CENTER OF THE SOUTH with names like Broyhill, Bernhardt, Hammary, Kincaid being synonymous with quality furniture.
Then along came China...and well, you know the REST Of The Story! Greedy owners decided to take the business overseas and to heck with the people who worked for them.
Before the furniture moved away we did have several textile companies in our area, too...Yep, most of them left, too.
Many people are out of work here, at one time I think it was like l5% unemployment rate,,,and probably more have expired their benefits so are not counted.
Several Years back our "uptown" began efforts trying to re-vitalize...new shops were opened, the uptown area "perked up" a bit and you'd even see cars lining the streets at night time often.
The banks (well, at least one that I know of) were/was eager to loan money to those who were investing their time and energy to put new life into old buildings and our old town.
Times are still slow in the area...uptown is looking good....it's hard on these small businesses to make it with the negative economy here...but they're trying!
Now the BANK is calling the loans. No bones, it's been hard for these folks to manage...but their hearts and souls are into the project they're working on. They have ambition! The bank has told them their loan is due. I understand another owner/buyer has been told hers will be due by the end of the year.
Yah , sure! So friends of this couple are trying to raise money to help them out...
Just thought I'd share the story with you...life does , after all, have some things going on along with our McCoy hobby. This town was so vital when I was growing up, it's been sad to see it go downhill.
Posted by Quita at 7:00 PM

I'm not a big auction goer but I did learn a good lesson back in November when I attended an auction. I was so happy to be seeing friends and other collectors I waited a little too long to go pick up a box lot containing bowls that I bought. When I got to the table, my box lot was gone...yet I still had the ticket to pay for it! My fault for not going to get it promptly ....but shame, shame on the person who took it!

Again, check out the terms of auctions you're attenting or bidding on via the net. Some auctioneers allow the "house" to bid an item up to the price the seller wants...doesn't seem fair to me...


You'll NOT find this at Jeff Koehler's auctions..That's why I like attending auctions of his!
Posted by Quita at 10:09 AM

ANOTHER MCCOY AUCTION COMING UP!!

Our favorite McCoy auctioneer has done it again...he's booked another McCoy auction. This one is l,000 pieces from long time and well known collectors, Dan and Marge Prater. It's scheduled for April 17, I believe...it's on SUNDAY Check his website for details as they emerge. This is at the end of tax season and everyone will have their refunds. What better to spend it on than McCoy?
Posted by Quita at 10:05 AM

OUTSTANDING
McCOY POTTERY AUCTION
John Vorisek Collection
John Vorisek has been an avid McCoy Pottery collector for many years. His collection is an extremely outstanding show, with many rare and unusual McCoy pottery items. John has decided to part with this treasured collection and share it with others. This McCoy Pottery collection will be sold at public auction in two separate sessions.
The first session will be on July 9th, 2011. The second session will be in July 2012. Both auctions will take place at the Welcome Center in Zanesville, Ohio.
The auctions will be conducted by Jeff Koehler Auction Services. For listing of the July 9th auction visit www.seohioauctions.com
Posted by Quita at 8:13 PM 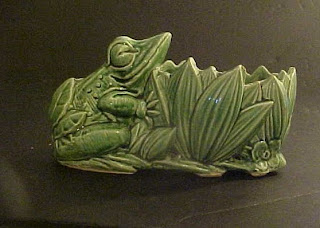 This new frog recently migrated to my house. She is approx. 9" long and clearly marked McCoy USA on the bottom
Posted by Quita at 1:36 PM